The Experiences project focuses on on large–scale deployment and iterative development of phone-based applications, in particular games and social networking applications, to combine and ground the work of other Populations projects. Such applications use our tools and infrastructure—elements of which make manifest the work of inference, formal modelling and conceptual work—to record and analyse data on the activity of users, evaluators and developers, offer control over the spread of data among users (e.g. teammates and opponents, and social networks) and researchers, and engender useful changes to system design and use. This project advances deployment methodology, e.g. setting small–scale user trials within large–scale ‘app store’ releases, to verify locally observed findings and explain patterns in globally collected data. To facilitate such large-scale deployments, and assist long-term impact of the research, it uses collaborations with industrial and institutional partners.

Steps is a pedometer based app for iPhone.

Quped is a pedometer based app for iPhone.

AppTracker is an application for iOS that presents summary statistics about phone use. It is a ‘quantified self’ application that runs in the background, recording whenever the user transitions between apps or locks/unlocks her phone. On first launch of the app, a terms and conditions page explains the data that will be logged and requires explicit consent before the application can be used. The main application presents an overall view of how the phone is used, for example the top apps and the total time spent using it. The user can also browse detailed statistics about particular days, weeks and months and about particular apps.

AppTracker is a popular application with many thousands of active users. It was released in August 2013.

ScreenLife is a multi-device personal tracking application. It enables users to collect and combine data from more than one device. For example ScreenLife can be used to track the use of a laptop, a mobile phone and a tablet. The ScreenLife system is composed of two components: a set of loggers that monitor and record when a device is in use, and an interface to provide users with a visual presentation of their screen time across multiple devices. We implemented ScreenLife loggers for four platforms: iOS, Android, Mac, and Windows (meaning it will work on iPhones, iPads, Android phones, Android tablets, Mac computers, and Windows computers). The visual interface is implemented in HTML5 and JavaScript and can be viewed in a browser on any platform.

We have been working closely with a project based in Glasgow University’s Institute of Health and Wellbeing: FFIT (Football Fans in Training). This project, run in collaboration with the Scottish Premier League Trust, aims to benefit football fans by encouraging them to become more active and achieve weight loss targets, and through controlled trials has been shown to empower overweight men to lose weight and maintain a healthy diet and level of fitness. FFIT taps into the powerful individual and cultural influence that football has. By incorporating professional football clubs into the programme, fans are inspired to take part. Our aim in Populations is to tap into the established momentum and knowledge of FFIT, and support IHW in applying its principles among a much larger audience through an iPhone application called Match FFIT—initially in Scotland but then in Europe and beyond.

Match FFIT is starting out with a very simple design that we can refine and expand in the light of ongoing reactions, experiences and analyses. We intend to use data collected automatically from phones as well as observations of and interviews with those using the app. At the technical core of the first version of the app is activity tracking, initially using the accelerometer in the phone much in the same way that a pedometer works. Unlike a pedometer, we use the phone to offer richer and more social interaction around the tracked activity. Our intention is to build on the sense of community among fans—issues of membership, mutual influence, collective integration and shared emotional connection—so as to build upon existing behaviour and practice.

Match FFIT affords the three core requirements for Population experiences: configurability of software modules, long–term use, and mass participation. With regard to long–term use, FFIT spans many weeks of activity structured around official football leagues, and this has been shown to facilitate long-term behavioural change in its participants well after the official programme ends. Match FFIT builds on this by coupling diet and activity goals to club fixtures, so that the structure of the football season further encourages long–term use.

Pass the Ball is a activity-tracker based team game in which only one team member can track their activity at any one time. When a user registers, they join a team. Each team has a virtual ball, which only one player on the team can have possession of at any one time. When a player receives the ball, the app starts tracking that player’s activity. After one hour, or if the player passes, it ceases tracking. The user with the ball can also pass the ball to any other user on their team.

Users can write comments in the app, which are visible to all other team members, appearing on the same timeline that shows passing and activity data. Players are able to view the activity of other teams, but cannot view comments made by other teams. Team activity is presented in the app on a scrollable timeline. The timeline is updated every time a comment is made, and every time the state of the ball changes (for example when a pass is made, when the tracker is turned on, or when an interception is possible). When a player turns on their tracker, a visualisation of their activity is displayed together with the points they have scored. The visualisations can be seen by all teams.

Pass The Ball was implemented as a hybrid mobile web app, meaning it is run as a native application but content is displayed using HTML5. As much as possible of the app is implemented as a web app hosted by our servers (meaning the interface was standard across devices). For Pass The Ball, counting and uploading steps is run natively as it needs to be run in the background—something that cannot be done for a pure web app. Delivery of push notifications also needed to be handled natively. Points are uploaded to the server every minute. We sought to create a feeling of ‘liveness’ in the app, whereby players could observe their teammates’ activities in near real-time. We also included icons in the league view to show which teams currently had a player ‘on the ball’ whose activity was being tracked. 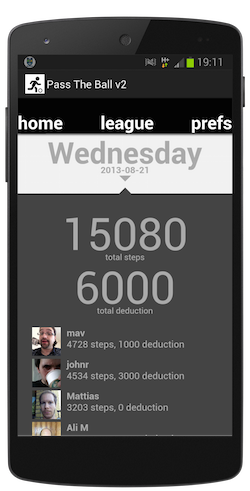 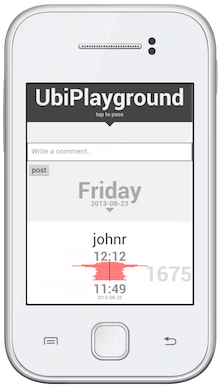 Post Factory is an exploratory deployment of a modular app – an app that allows users to build Facebook posts through a combination of photos, audio, text and various effects and filters.

The app is themed around a ‘Factory’ metaphor, where posts would be built according to a specification laid out in a ‘blueprint’. This blueprint is actually a series of modules that either accept new input or process previous content. Each module is run in a pipeline to build the post. An example is the ‘Drunk’ blueprint, which accepts an image and audio from the user, then stretches the audio and blurs the image. The idea is that a single blueprint such as ‘Drunk’, once created, can be used many times by many users, and that we can track its spread throughout the user population.

A large set of modules is provided. Input modules are text, image, audio, location, or information from music stored on the device. Transformation modules allow various effects to images, audio, and text manipulation. Several built-in blueprints allow users to get started and see the idea of the application. Users can then design their own, by selecting whichever modules they want, in whatever order they want. Although users are free to make any ordering of modules they like, some will not be acceptable configurations for the system (for example, an image input followed by an audio transformation). A user can run a blueprint to create a Facebook post. Once posted, the content (which might include audio, text or images) is posted on their Facebook account, and the blueprint is stored in the system for use by others.

Blueprints are shared in various ways. Under each Facebook post, there is a link to the app and the Blueprint. If user A uses Post Factory to make a Facebook post, all A’s friends will see the post and the links. If B, a friend of A, is also a Post Factory user, clicking the link will request the blueprint that A used, and install this on B’s device. If C, also a friend of A but not a Post Factory user, clicks the link, she will be guided to the App Store page to download Post Factory. In-app lists for the most recent and most popular blueprints are also presented, and users can download blueprints from here too. Once a user has installed a new blueprint, he or she can make similar posts to those who have used it previously. Alternatively, the blueprint can be amended or added to if the new user thinks it can be improved upon. Through these various means we hoped to track and study the spread and evolution of blueprints among the user population. 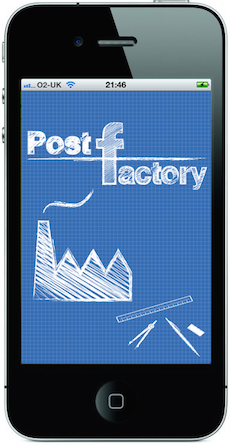 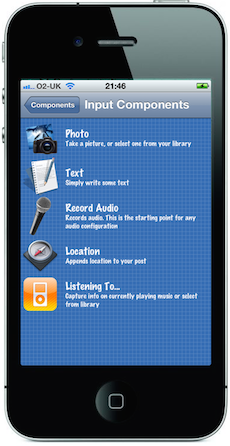 Hungry Yoshi is an iOS research application that creates a game based on the scanning of Wi-Fi access points. The app was first released in September 2009 and has had 300,000 downloads. As part of the Contextual Software project, we used the app to study the new possibilities in trial methodology made possible by deploying software via ‘app stores’ rather than through more traditional recruitment policies. In particular, we investigated the extent to which qualitative data capture and analysis was possible in trials conducted in this manner. Yoshi has been the basis of research published at Pervasive 2010 and CHI 2011.

Hungry Yoshi remains available to download and is still a platform through which research can be conducted on the Populations project,. However, as the game relies on Wi-Fi scanning functionality that Apple has blocked from iOS5 (released late 2011) onwards, it is only available to users running older versions of the OS, and daily user numbers are now only 10% of their numbers in the early days following the app’s release. We can still ask questionnaire and survey- style questions of users via Yoshi’s ‘tasks’ mechanism. The process for this is purely server-side, so this can be done without the requirement for an update release of client software. We also continue to gather log data from Hungry Yoshi, which has been analysed using previously developed tools but is now also being studied using new inference methods—as described here. 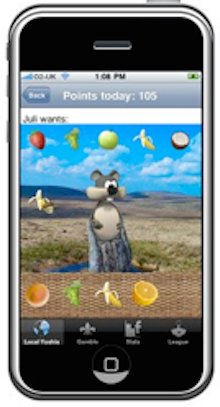